City Maps Through The Ages

From London’s cholera outbreak to the siege of Frankfurt, these are the works of the earliest data gurus, who charted not just geographical details but trends and tragedies in some of the world’s cities. 1552: Map of the siege of Frankfurt by Conrad Faber von Kreuznach. This battle during the thirty years war depicts soldiers and battalions to almost blending in with the region’s landscape, on the left Public domain. 1581: Christian medieval map with Jerusalem as the centre of the world, by Heinrich Bunting
Image Asset Management Ltd/Alamy. 1672: New Amsterdam by Gérard Jollain. This map claimed to represent Nowel Amsterdam en Lamerique (New Amsterdam in America). Except that’s not New Amsterdam, it is actually er … Lisbon, Portugal. The fraudulent map does have a few additions, like the castle in the top right that purports to show the French territory Quebec.
The British Library. 1812: Map of the great fire of Moscow by Russian army topographers. A huge fire devastated the Russian city, destroying an estimated 75% what would later go on to become the capital. The shaded portions of the map depict the areas damaged by the flames, which were thought to have been started by the Russians before Napoleon’s invading troops had a chance to enter the city. Public domain. 1854: John Snow’s map proving the Broad Sreet pump in Soho was linked to a cholera outbreak in London. Public domain. 1869: Paris electoral map by Leon Montigny. We’re all used to maps of elections by now but they’re not exactly a new concept. The rectangles in this map of election results in 1869 featured by Cartographia, show how many voters there are in each district and the colours indicate the way the votes went. Given that the parties of the effective dictator Napoleon III were in yellow, it is clear that the city wasn’t very happy with its leader. Public domain. 1887: Sanborn insurance maps of San Francisco. Maps were utilised by insurance companies to determine the liability of a particular property via various factors such as its building materials, proximity to other premises and location of nearest fire departments. Cartography Associates. 1891: Charles Booth’s poverty map of London. Booth and the survey into life and labour in London (1886-1903) charted boroughs by wealth – the darker the shade, the poorer the area. Robana/The British Library via Getty Images. 1941: German bombing targets in UK cities – this map of Edinburgh provides an insight into the military technology of the second world war. National Library of Scotland. 1945: Hiroshima damage map, showing the extent of blast and fire damage to the Japanese city after an atomic bomb was dropped on it by the US. Public domain.

This feature originally appeared on The Guardian.

The Micro-Dwellings of Hong Kong

The Age Of The City-States

What Are Viruses Anyway, And Why Do They Make Us So Sick? 5 Questions Answered 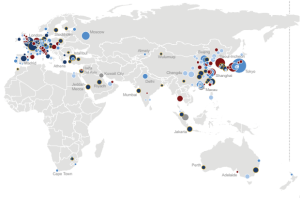 City Maps Through The Ages