Why Singapore Is Making The Best Airport Obsolete Airport and paradise are two words destined never to sit next to each other in the same sentence, but looking at the plans for Singapore’s new airport that could soon change.

Construction on the city state’s new structure for Changi Airport, the Jewel Changi, is underway.

Images of how the project looks when it’s finished show impressive steel-and-glass biosphere-style structures filled with plants and a gigantic waterfall. Jewel’s two centerpieces are Forest Valley, through which passengers will be able to hike, and Rain Vortex, a gigantic cascade of water from the roof.

Maintaining Singapore’s reputation as the “garden city,” Jewel Changi’s centerpiece will be Forest Valley, a five-story garden with thousands of trees, ferns and shrubs.

On completion, it’ll be the world’s tallest indoor waterfall, according to the airport. Scheduled for completion in 2018, if all goes according to plan, Project Jewel is likely to cement Changi’s reputation who is recently named SkyTrax World’s Best Airport for the third consecutive year.

The massive donut-like structure at its core will be 10 stories — five above ground and five underground — integrating airport facilities, with retail and leisure outlets. Cascading through Jewel’s donut hole, in the middle of the forest, will be the 40-meter-high Rain Vortex. Rain Vortex will be the world’s tallest indoor waterfall when completed. At night it will be transformed by light and sound show. “We envisaged an area that comes with big sprawling spaces and play activities,” says Goh of Canopy Park.

“We wanted to create a place where visitors can simply relax and have fun with their families and friends.” More than 200 retailers from local and international brands will be housed in the Jewel. Local shophalics may find themselves here for the weekend, even if they’re not catching a flight. Changi’s new leisure complex will have 90 food and drink outlets, some with waterfall view patios. Jewel will cater to passengers with a “multi-modal transport lounge” that will offer ticketing and boarding pass and baggage transfer services, as well as early check-in facilities.

There’ll also be playgrounds and a hotel.

More than simply a new terminal, Jewel Changi Airport will be constructed on the site of the old parking lot fronting the existing Changi Airport’s Terminal 1, and will be “seamlessly connected” to the existing terminals, according to the airport. Commuters will even be able to take a hike up the valley. “We wanted to create a space where activities that were traditionally outdoors in nature are brought to an indoor environment,” Robin Goh, Changi Airport Group spokesperson.

Staying ahead of the field

Travelers will be able to stay at Jewel’s own hotel — approximately 130 rooms operated by international hotel brand YOTEL.

The complex will house an “integrated multi-modal transport lounge.”

That means ticketing, boarding pass and baggage transfer service will be available for passengers.

Early check-in facilities at the complex will allow passengers to check-in and drop off luggage ahead of regular check-in times.

There’ll also be new subway links connecting all the airports terminals to the MRT network.

A winner of multiple best airport awards over the years, Changi served 54.1 million passengers in 2014.

The airport expects a new Terminal 4 opening in 2017 for Cathay Pacific and Jewel in 2018 to bring 85 million passengers a year. “In order for Changi Airport to stay ahead amidst intensifying competition from other airports, it’s important for continuous innovation to be introduced,” says Goh.

This feature is adopted from CNN.

How The Future Of Food Markets Will Look Like The Past

How Ancient Mayan City Built On A Grid Pattern

The World’s Most Powerful Passports Of 2020 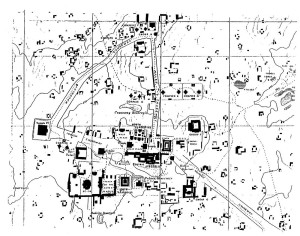 How Ancient Mayan City Built On A Grid Pattern
In the course of excavating remains of the Mayan city,…
SHARE

Why Singapore Is Making The Best Airport Obsolete