Long ago, a large part of north-western Europe, particularly Ireland and Great Britain, were covered in bogs. These soggy wetlands, composed of partially decomposed remains of dead plants, formed at the end of the last ice age, about 10,000 years ago. At this time, much of north-western Europe was covered by shallow lakes left behind by the melting glaciers. Poor drainage and build up of dead plants created layer upon layer of peat. Researchers estimate that nearly one-fifth of Ireland was covered by bogs.

In order to cross these marshy lands, the ancient people built raised wooden roads or trackways. These wooden trackways, unique to Europe, were built from the Neolithic times until the middle ages. Originally they were used for foot traffic, but once wheeled carts were invented and introduced into the north of Europe they became a necessity. Eventually, the trackways deteriorated and fell into the bogs, where the unique chemical structure of the bog soil and the lack of oxygen preserved these ancient structures to this date. One of the best preserved examples of wooden trackways is the Corlea Trackway that lie across an ancient bog near the village of Keenagh, south of Longford town, in Ireland. The trackway is a kilometer long and wide enough to fit a cart.

The Corlea Trackway is located in an area where large-scale mechanised peat harvesting is carried out to supply raw materials for the peat-fired power stations. While the area today is a flat brownish wasteland, in the Iron Age it was covered by bog, quicksand, and ponds. This was surround by dense woodlands of birch, willow, hazel and alder while higher ground was covered by oak and ash. The terrain was dangerous and impassible for much of the year.

LEARN MORE  Backtrack : On The Eve Of War

In 1984, while digging for peat, the trackway was discovered about two meters under the surface of the bog. Tree ring analysis of the oak planks used to construct the trackway revealed the trees were felled in late 148 B.C. or early 147 B.C. Further excavation revealed more than a hundred trackways in the area and an additional seventy-six trackways were discovered in the nearby Derryoghil bog. The majority of these trackways, also called toghers in Ireland, are constructed from woven hurdles laid on heaped brushwood on top of the surface. The Corlea Trackway is made from oak planks 3 to 3.5 meters long and around 15 centimeters thick, laid on rails. To construct this kilometer-long walkway, the wood of at least 300 large oak trees must have been felled. This would amount to a thousand wagons loaded with oak. Around the same amount of birch wood was used for the rails beneath.

The Corlea Trackway ended on a small elevated land, from which a second trackway, again around 1 kilometer long, connected to dry land on the far side of the bog. Wood used to build the second trackway came from oaks that were cut down in the same period as that for the Corlea Trackway, so there is good reason to believe that the entire road system was completed in one year. The construction of the roadway must have required a great deal of labour, which is odd because the Corlea Trackway seems to have no useful purpose that justifies the immense undertaking.

Not all trackways were built to cross bogs. Some were also designed to get into the bogs, and the Corlea Trackway might have been one of them. Over the centuries, archeologists and peat harvesters have pulled out hundreds of bodies from peats across Europe. These bodies bear signs of violent death that suggest they were either victims of ritual sacrifice or prisoners executed for their crimes. Read more about these bog bodies.

About 18 meters of the original Corlea Trackway is now preserved in a specially designed hall with humidifiers to prevent the ancient wood from decomposing or cracking in the heat. A surrounding area of 4 hectares of intact raised bog with the trackway was left undisturbed in waterlogged conditions. About 80 meters of buried trackway, leading to the visitor center was boarded over with modern boardwalk. The preserved section of the Corlea Trackway inside the display hall. Photo Credit : www.boomingback.org Another wooden trackway discovered in Annaholty Bog, in Ireland, and subsequently excavated. The trackway was up to 7m wide and 65-70m long, connecting two islands of dry ground within the bog. Dendrochronological dates place the felling of the trees around 40BC. A replica of a trackway called the “Sweet Track” in Shapwick Heath, Somerset Levels, England. The original was built in 3807 or 3806 BC to cross a marsh. A replica of another neolithic trackway in Somerset, called Abbot’s Way. It was built around 2000 BC. The replica no longer exist, as it was washed away in a flood. UK's Sheffield City And Its Mirror Mirror On The Wall

40 Years Of Changing Horizons Of Manhattan & The World Trade Center 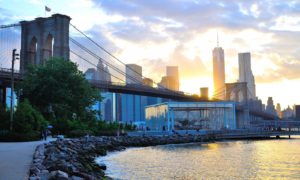