Amazon Fires Explained: What Are They, Why Are They So Damaging, And How Can We Stop Them?

Imagine a rainforest at dawn – the tall canopy laden with dripping ferns and orchids, tree trunks covered in spongy mosses and lichens, and the morning mist only slowly burning away as the sun rises. While there is fuel everywhere, it seems unimaginable that such humid ecosystems could ever catch fire. 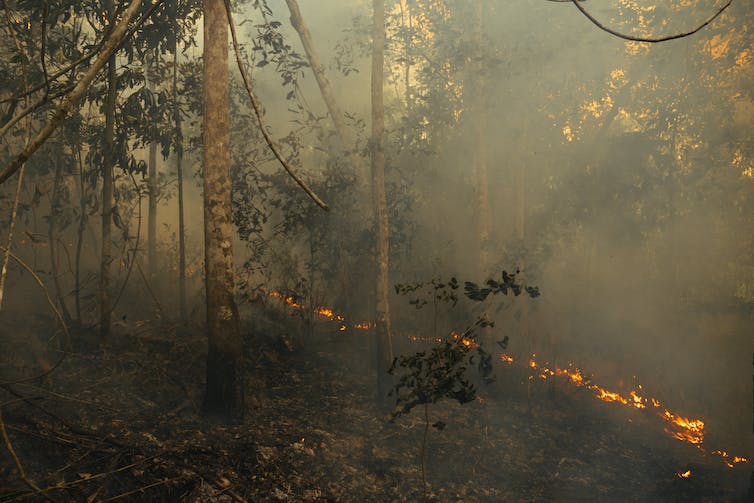 And without human intervention, they don’t. The charcoal record points towards infrequent fires in the Amazon even during periods of pre-Columbian human settlement, and the 8,000 or more Amazonian tree species have none of the evolutionary adaptations to fire found in their savanna or boreal cousins.

But, with thousands of fires currently burning across the Amazon, it’s worth looking at how these wildfires behave. In this context, a “wildfire” is one which has gone out of control, even if started by humans. What do they mean for a forest that hasn’t evolved with fire? And what is needed to prevent further damage?

Most mobile animals are able to flee, and firefighters – if present – can bring it to a halt by raking simple fire breaks. Indeed, the humble trails of leaf cutter ants were sufficient to stop forest fires in an experiment in the southern Amazon.

But the intensity of a fire does not necessarily predict its severity. The lack of natural adaptation to deal with wildfires make rainforest species incredibly sensitive. Even a low-intensity wildfire can kill half the trees. While small trees are initially most susceptible, larger ones often die in subsequent years leading to an eventual loss of more than half of the forest’s carbon stocks. These large trees hold the most carbon, and subsequent regrowth of pioneer species is no compensation – once-burned, forests hold 25% less carbon than unburned forests even after three decades of regrowth.

With such a devastating impact on the trees, it is not surprising that forest-dependent animals and people are also affected. Primates are less abundant in burned forests and many specialist insectivorous birds disappear altogether. And local people, who use forests for game, building materials and medicines, lose one of their most important safety nets. 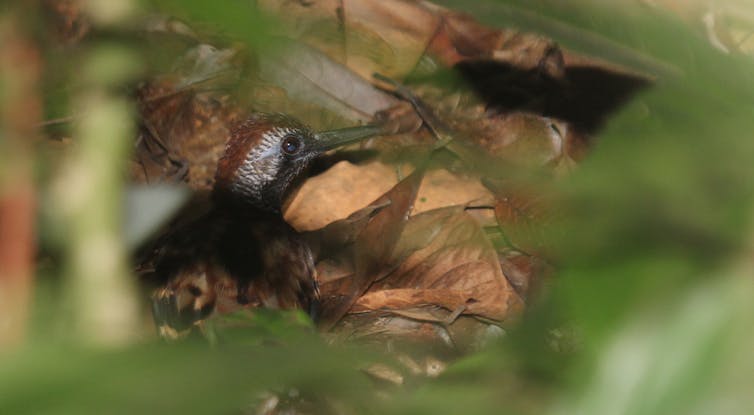 The Wing banded Antbird (Myrmornis torquata) is a secretive oddball terrestrial songbird that flips leaves to look for insects in the forest understorey. The species vanishes in burned forests as fires alter its humid understorey habitat. Alexander Lees

All this happens when a forest burns for the first time. However, the situation is very different when forests suffer recurrent fires. Then, fuel from previous tree mortality creates a veritable bonfire, tinderbox dry under an open canopy. Flame heights in these forests often reach the treetops, causing the death of almost all remaining trees.

LEARN MORE  The Brazilian Amazon Was In Flames, And Now Australia. But What Do Their Governments Have To Do With It?

Such a scenario has been likened to “savannization” – but while the resulting scrub and sparse trees may share superficial similarities with fire-dependent tropical grasslands, they contain none of their unique biodiversity or cultural values. Instead, recurrent wildfires are more likely to hasten the Amazon’s transition to a low diversity and low carbon ecosystem with a fraction of its current social and ecological value.

We know that forest fires are not a natural process in Amazonia, so why are so many fires happening now? Unfortunately, it is not yet clear exactly what has been burning – satellites detecting active fires and smoke are imprecise guides, and we will only get greater clarity when burn scars are accurately mapped across all land uses. But the current increase is likely to be a mix of three different fire types.

Some of the fires are related to a recent spike in deforestation, when the cut vegetation is burned to create cattle ranches and support land claims. Others will be agricultural burns, when fires are used in rotational agriculture or to clear encroaching scrub from existing pasture.

Alarmingly, and even though this dry season is considered normal, there is evidence that these intentional fires have led to wildfires in standing forests, including in indigenous reserves.

Addressing these fires is complex as many of the activities are illegal or politically motivated. For example, there was a marked increase in fire detection during the recent “day of fire”, and loggers or land speculators have previously been implicated in causing wildfires in indigenous reserves. Furthermore, it is important to separate these illegal fires from the small-scale slash-and-burn agriculture used by Amazonia’s traditional and indigenous people. Although these fires can escape into forests, they are also essential for maintaining the livelihoods of some of the Amazon’s poorest people. 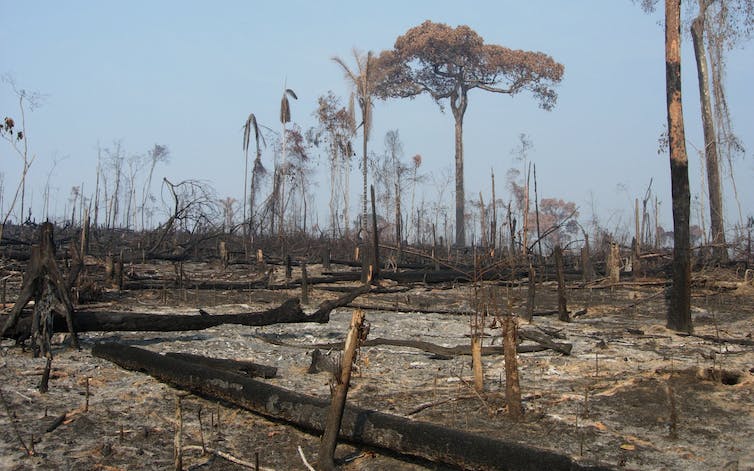 Aftermath of burning to clear forest for pasture around the town of Novo Progresso in 2006. This region has been at the epicentre of the 2019 fires and reports of an attempt by local ranchers to send a coordinated message to the Brazilian president that they are ready to go to work clearing the forest. Alexander Lees

When fires do enter the forest, they can be fought with low-tech approaches such as fire breaks. Yet effective combat remains rare, and in most cases help is either delayed or fails to arrive at all.

Under Jair Bolsonaro, Brazil’s president, funds for the Brazilian environmental protection agency IBAMA have been cut by 95%. This has resulted in a R$17.5m reduction in funds for fire fighting that have been exacerbated by the loss of an Amazon Fund from Norway and Germany.

Reducing wildfires requires going beyond addressing the ignition sources and fighting the flames themselves, and also encouraging actions that limit forest flammability. Tackling deforestation remains key as it exposes forest edges to the hotter and drier microclimate of agricultural land, and contributes to regional reductions in rainfall.

Selective logging also plays a key role in making tropical forests more flammable. Walking in a selectively logged forest in the dry season, you feel the sun’s heat directly on your face and the leaf litter crackles and crunches underfoot. In contrast, unlogged primary forests are a shadier world where the leaf litter remains moist. Fire prevention needs to be a key condition of long-term forest stewardship. This will only work if widespread illegal logging is effectively controlled, as cheaper timber undermines the viability of best-practice forest management.

‘We Die Together’: Hong Kong Protests Are Being Driven By A Fearless Young Generation

The Cities With The Highest Cost Of Rent 2019 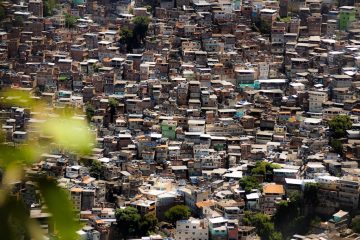 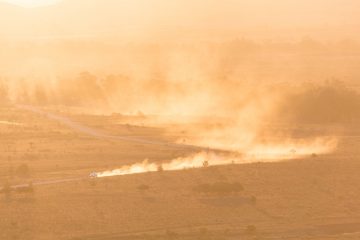 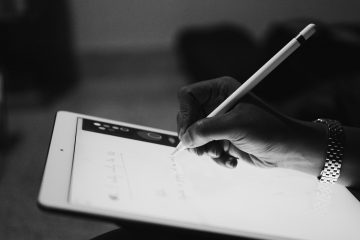 The Future Of AI Revenue : Top 10 Use Cases For AI In The Next Decade 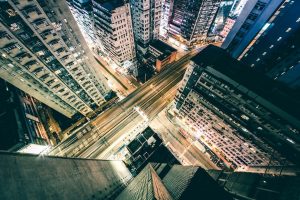 The Cities With The Highest Cost Of Rent 2019
Need to move out and rent a place? These cities…
SHARE

Amazon Fires Explained: What Are They, Why Are They So Damaging, And How Can We Stop Them?