Cities are experimenting with different materials — from heated panels to flexible rubber — but the best replacement has yet to emerge. Concrete has long been the go-to material for sidewalks because it’s strong and cheap. The typical stretch of walkway can last decades; New Jersey sidewalks have an estimated lifespan of 75 years. But concrete has its drawbacks, too, especially for cities intent on improving walkability. Tree roots can crack concrete, creating hazards for pedestrians (especially wheelchair users and parents pushing strollers), and the more a tree grows the more its surrounding sidewalk swells. Frequent replacement can get costly — about $35 per square foot in Los Angeles — and self-healing concrete exists more in theory than in practice.

Some cities have started to rethink the traditional sidewalk as a result. Local governments and technology companies all over the world are considering new ways of building pedestrian pathways that go beyond the common mix of cement and aggregate we know as concrete. These materials have broadened not only how cities construct sidewalks but also the very notion of what a sidewalk can be. They can now enhance walkability, generate renewable energy, and improve public safety, even as they withstand all those tree roots that have been breaking concrete slabs for decades.

Snowy cities from New York to Minneapolis have begun experimenting with heated sidewalks. Though typically poured with traditional concrete, these sidewalks are embedded with a vascular system of tubing that carries heated water, warming the surface just enough to melt snow and ice. The systems are expensive; costs can climb over $100,000 for a stretch of heated sidewalk in front of an apartment or at a train stop. But as both doormen in New York and local officials in Minneapolis can attest, the melted snow greatly reduces the need for shoveling as well as the hazards of slipping.

On the higher end of the technology spectrum is a growing interest in using sidewalks — and the people who walk on them — as energy generators. A U.K. company called Pavegen has created a recycled rubber paving tile that converts the pressure of pedestrian footsteps into kinetic electricity. The tiles have been installed in train stations, playgrounds, and offices throughout the U.K. and France, and are used as an off-grid power source for street lamps, harvesting the energy of thousands of footsteps.

Sidewalks can be a source of passive energy, too. Last fall, George Washington University’s Virginia Science and Technology Campus, in Ashburn, unveiled “Solar Walk,” a 100-square foot section of walkable solar panels. At peak production, the small solar installation can generate enough energy to power 450 LED lights in the pathway — not exactly a power plant, but a scalable idea that takes advantage of huge amounts of power-creating potential on the ground.

Another sidewalk company, Pro-Teq Surfacing, has gone even more passive by creating a spray-on substance that can make walkways glow in the dark. The material absorbs and stores UV light during the day and releases it at night, creating a spacey blueish glow. The company has started to test its spray on a small section of walkway in a park in Cambridge, England. Pavegen panels at the Saint-Omer train station, in Northern France. Via Pavegen.

But the most common new sidewalk technology is the flexible rubberized sidewalk. Often composites of old tires and recycled plastics, these rubber-based materials aim to counteract the destruction tree roots cause to concrete slabs. The city of Santa Monica, California, has been a leader in adopting rubberized sidewalks since 2000, and many other U.S. cities have followed. The rubberized panels, manufactured by Southern California-based Terrecon Inc., are secured to each other as well as the ground, offering a smoother walking surface with fewer gaps between panels for people to trip on. There’s an estimated 20,000 square feet of rubberized sidewalk throughout the city today.

In Santa Monica, these little groups of off-gray rubber sidewalk panels are typically found next to the trunks of Ficus trees. Though they look almost like concrete, one step reveals a slightly softer surface. They have a little give, though not so much that pedestrians sink in or bounce off. You can easily walk — or bike or wheelchair — over them, though some are lumpier than others. The tree roots may not be breaking through the surface, but they’re still growing and, in some cases, turning the flexible ground into a wavy terrain. It can feel like walking on a funhouse mirror.

These results are less than ideal. After years of experiments with different materials and iterations of rubberized sidewalks, the city’s not sure the idea will work. “It has not panned out from a maintenance standpoint as we expected,” says Sylvester Mabry Jr., manager of Street and Fleet Services for the city of Santa Monica. He says the original impetus for investing in rubberized panels was their estimated 7-to-10 year lifespan, which would have calculated out to be cheaper in the long run than the regularly required tear-outs and re-pours of concrete sidewalks. Mabry says many of the rubberized panels lasted just two years, and the city has stopped installing more until they can achieve the desired lifespan.

The most common new sidewalk technology is the flexible rubberized sidewalk. But the results in Santa Monica have been less than ideal.

The early stumbles are a warning sign for other cities that may be reconsidering their own sidewalk materials. (Washington, D.C., is testing out a porous pavement alternative that wraps snugly around trees.) In Los Angeles, which shares with Santa Monica a penchant for concrete-busting Ficus trees, much attention has been focused on the city’s ailing sidewalks in recent months. Officials are considering a 15-year half-cent sales tax increase, part of which would go towards sidewalk repairs and improvements.

In February, City Council member Bob Blumenfield introduced a motion calling on the city’s Bureau of Street Services to launch a pilot program for testing alternative sidewalk materials, like the rubber used in Santa Monica. He says the tree root issue is “a catalyst to make some serious change,” but also that the city should consider materials like porous pavement that can help address the city’s water scarcity issues. Blumenfield expects the pilot project to hit the ground within a few months.

“The rubber is just one of many different ideas, and I’m agnostic as to which technology or which new type of sidewalk we use,” says Blumenfield. “If we can find a material that is cost effective and that allows for water recharge, I’d want to see it everywhere.”

This article originally appeared in CityLab.

How Brooklyn Is Like Buenos Aires: Toward A Science Of Cities 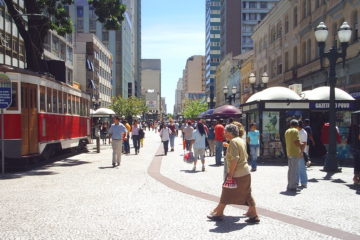 How Much Can Cities Do About Walkability? 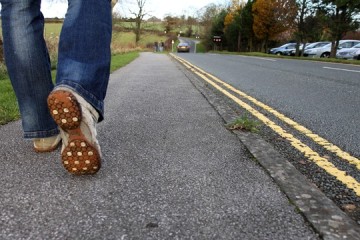 The Remarkable Power Of Sidewalks 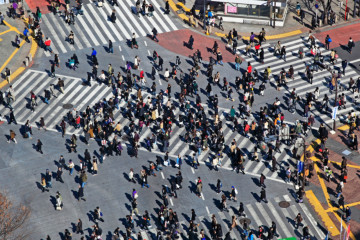 Streets Are For People, Not Cars 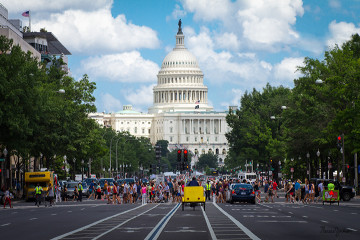 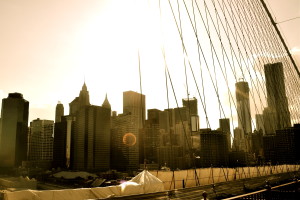 How Brooklyn Is Like Buenos Aires: Toward A Science Of Cities
Marc Barthelemy and Rémi Louf, researchers at L'Institut de Physique Théorique…
SHARE