The Military Power, Economics And Strategy That Led To D-Day

On June 6 1944, more than 150,000 Allied troops landed in Normandy. Their number rose to 1.5m over the next six weeks. With them came millions of tons of equipment, ranging from munitions, vehicles, food, and fuel to prefabricated floating harbours. 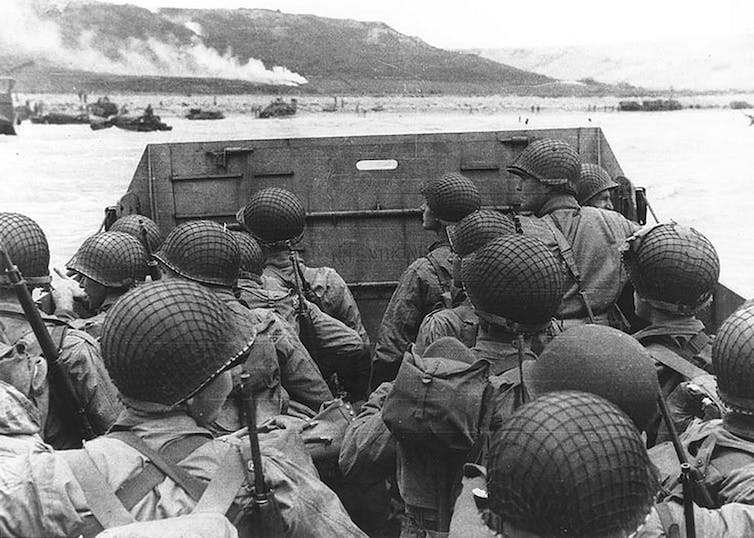 The culmination of a lot of planning, and a lot of building. DVIDSHUB, CC BY-ND

The achievement of the Normandy landings was, first of all, military. The military conditions included co-operation (between the British, Americans, and Free French), deception and surprise (the Germans knew an invasion was coming but were led to expect it elsewhere), and the initiative and bravery of officers and men landing on the beaches, sometimes under heavy fire. More than 4,000 men died on the first day.

D-Day was made possible by its global context. Germany was already being defeated by the Soviet Army on the eastern front. There, 90% of German ground forces were tied down in a protracted losing struggle (after D-Day this figure fell to two-thirds). The scale of fighting, killing, and dying on the eastern front was a multiple of that in the West. For the Red Army in World War II, 4,000 dead was a quieter-than-average day.

Economic factors were also involved. In 1944 the main fighting still lay in the east, but the Allied economic advantage lay in the west. Before the war the future Allies had twice the population and more than twice the real GDP of the Axis powers. During the war the Allies pooled their resources so as to maximise the production of fighting power in a way that the Axis powers did not attempt to match. America made the biggest single contribution, shared with the Allies through Lend-Lease.

Between 1942 and 1944 Allied war production exceeded that of the Axis in every category and on all fronts. This advantage was especially great in the West. In the chart below, a value of one on the horizontal plane would mean equality between the two sides. Values above one measure the Allied dominance: 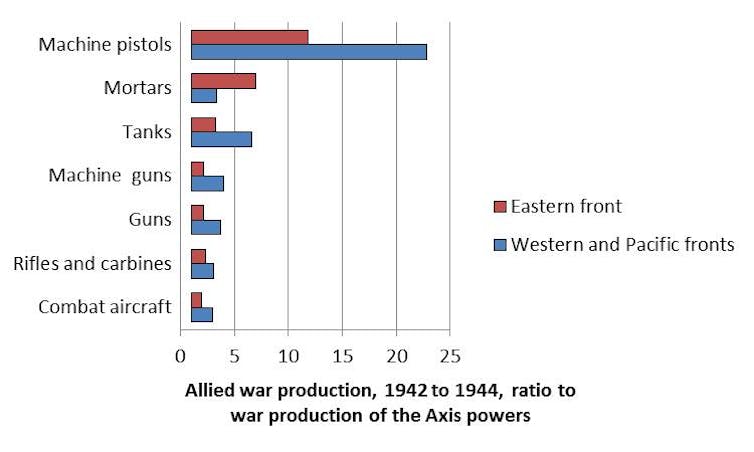 The Allies made more planes, guns, tanks and bombs on every front. Mark Harrison

Eventually, the accumulation of firepower helped turn the tide. A German soldier in Normandy told his American captors, “I know how you defeated us. You piled up the supplies and then let them fall on us.”

D-Day was made possible by economics, but it was made inevitable by other calculations. When the outcome of the war was in doubt, Stalin demanded the Western Allies open a “second front” in Western Europe to take pressure off the Red Army. At this time, working towards D-Day was a price that the Allies paid for Stalin’s cooperation in the war. By 1944 German defeat was assured; now D-Day became a price the Western Allies paid in order to help decide the post-war settlement of Europe.

While D-Day was inevitable, its success was not predetermined by economics or anything else. The landings were preceded by years of building up men and combat stocks in the south of England, and by months of detailed logistical planning. But most of the plans were thrown to the wind on the first day as the chaos of seasick men struggling through the surf and enemy fire onto the Normandy sands unfolded. This greatest amphibious assault in history was a huge gamble that could easily have ended in disaster.

Had the D-Day landings failed, our history would have been very different. The war would have dragged on beyond 1945 in both Europe and the Pacific. Germany would still have been undefeated when the first atomic bombs were produced; their first victims would have been German, not Japanese. Germany and Berlin would never have been divided, because the Red Army would have occupied the whole country. The Cold War would have begun with the Western democracies greatly disadvantaged. We have good reason to be grateful to those who averted this alternative history.

D-Day 75 Years On: 'Special Relationship' Forged On The Beaches Of France Now Poised To Enter A New Era 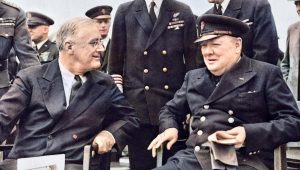 D-Day 75 Years On: ‘Special Relationship’ Forged On The Beaches Of France Now Poised To Enter A New Era
In 1944 the blimps above London were barrage balloons –…
SHARE

The Military Power, Economics And Strategy That Led To D-Day