What’s The Perfect Size For A City?

The world’s cities are sprawling over their boundaries, fragmenting into smaller parts run by competing regional governments. But amalgamating them brings other problems … Protesters march through the streets of Ferguson in August. Photograph: Jeff Roberson/AP

The death of Michael Brown, shot by a police officer last year in Ferguson, Missouri, triggered civil unrest and protests that have yet to subside, with two police officers recently shot in the city. The media has blamed lots of things for the chaos that has engulfed Ferguson, from racism to inequality, but one factor might raise an eyebrow: municipal fragmentation in the St Louis area.

There are 90 separate cities and towns in St Louis County alone, which has created a landscape of small, cash-strapped cities pulling on tiny tax bases to finance their governments. The US Justice Department has specifically accused Ferguson of using its police department as a revenue-raising arm, with a racial bias and as such it could be argued that municipal fragmentation played a role in creating the conditions that produced police-community tensions in Ferguson.

A few year earlier, in 2010 and 800 miles to the north-east, Toronto elected the suburban politician Rob Ford from Etobicoke as mayor. Ford swept into office pledging to “stop the gravy train” and cut spending, cancelling bike infrastructure and streetcars. His sensibilities appalled urban Torontonians. The urban studies theorist Richard Florida called him “the worst and most anti-urban mayor in the history of any major city”. His mayoralty ultimately collapsed in a wave of scandals, including when he got caught on video smoking crack.

People in ​​living in cities and those in their suburbs often have different values, priorities and cultures
One of the factors blamed for the Rob Ford phenomenon? Amalgamation, or the consolidation of the city of Toronto with several formerly independent municipalities, including Etobicoke. It is amalgamation that allowed suburbanites to take control of governance over the inner city by electing one of their own as mayor.

Welcome to the wonderful world of governing urban regions, where between fragmentation and amalgamation no one actually knows what the right-sized box for local government is or how to change it – but everyone can see the problems of most of the existing governance models. An election on 7 April was seen as a critical step toward ending racially discriminatory practices that thrust the St Louis suburb into the national spotlight last year. Photograph: Jim Young/Reuters

Municipal fragmentation has been criticised for decades. In Cities Without Suburbs, his influential 1993 book, former Albuquerque mayor David Rusk argued that Rust Belt cities in the US failed to succeed in part because they were unable to expand, and found themselves hemmed in by a jigsaw puzzle of independent suburbs.

But with cities having become central to national governance in the 21st century, institutions like the Organisation for Economic Cooperation and Development (OECD) and the World Bank are weighing in, too. Both recently sounded the alarm about the risks of urban fragmentation on a global level, for the developed and the developing world.

LEARN MORE  How Does A City Shape Women’s Feelings Of Safety?

“Often, administrative boundaries between municipalities are based on centuries-old borders that do not correspond to contemporary patterns of human settlement and economic activity,” the OECD observed in a recent report. The thinktank argued that governance structures failed to reflect modern realities of metropolitan life into account.

Behind the report’s dry prose lies a real problem. Fragmentation affects a whole range of things, including the economy. The OECD estimates that for regions of equal population, doubling the number of governments reduces productivity by 6%. It recommends reducing this effect with a regional coordinating body, which can also reduce sprawl, increase public transport satisfaction (by 14 percentage points, apparently) and improve air quality.

The World Bank, meanwhile, is worried about the way rapid growth in developing cities has created fragmentation there, too. Metropolises often sprawl well beyond government boundaries: Jakarta, for example, has spread into three separate provinces. The World Bank calls fragmentation “a significant challenge in the East Asia region”.

“It’s quite a surprise how much fragmentation there is,” says Judy Baker, one of the authors of the World Bank’s recent report titled East Asia’s Changing Urban Landscape. “It’s a challenge for almost every city.” Among the surprising findings of the report is that 135 of the nearly 350 urban regions they surveyed in East Asia had no dominant local jurisdiction. The glaring example here is of course the largest urban area in the world, the Pearl River Delta region in China, a megapolitan region that includes many major cities, including Hong Kong, Shenzhen, Guangzhou and others. In Manila in the Philippines, no less than 85 municipalities are involved in the megacity’s governance.

Planners love efficiency, but even on a piece of paper it can be hard to know what size box to draw. As the OECD put it: “Even if policymakers try to reorganise local governments according to functional relations within urban agglomerations, it is often difficult to identify boundaries between functionally integrated areas.” In plain English: nobody really knows where to draw the lines.

And as the Toronto example shows, amalgamation – bringing fragmented government regions together – comes with downsides of its own. Of course, you can put people in the same governmental box, but that won’t necessarily create common ground – instead, it can create a zero-sum, winner-takes-all dynamic.

People in living in cities and those in their suburbs often have different values, priorities and even a different culture. They can be, as was famously said of English and French Canada, “two solitudes”. Urbanites who support regional governance frequently assume that means more power, money and resources for the central city. But as Rob Ford so richly illustrated, that’s not always the case.

Among those who stand to lose from regional government are minorities. In Ferguson, black residents were already under-represented in government relative to their population. But as a voting block they would find their strength heavily diluted in a merged government: Ferguson is more than two-thirds African-American, while St Louis County plus the city of St Louis together are about 70% white.

Unsurprisingly, central cities tend to prefer regional revenue-sharing without giving up political control. Detroit, despite serious financial problems, has viciously fought sharing control over city assets, even where they serve a broader region. Detroit’s convention centre is a good example of the tensions that can arise: it took years to agree renovations to the building, as despite arguing the suburbs should help pay for the building they partly enjoy, the city did not want to cede any control over it. Indianapolis is also an instructive case. The city established a consolidated regional government in 1970 called Unigov (which Rusk hailed as a model). Unigov expanded the city’s tax base by amalgamating most of its new, fast-growing suburbs into the city. But the urban region continued to sprawl, eventually going beyond even the newly consolidated boundaries. Today’s growth in Indianapolis is all happening outside Unigov’s borders, and the city now finds itself supporting ageing suburban areas – just like Ferguson in St Louis – that it can’t afford. Consolidated government arguably gave Indianapolis four decades of financial breathing room, but that simply let it put off reform.

Similarly, the Port Authority of New York and New Jersey was originally a well-functioning regional governance body, but is now a quagmire of dysfunction. The soaring costs of Spanish architect Santiago Calatrava’s $4.2bn PATH subway station at the World Trade Centre – and a proposal to spend $10bn to replace a bus station – are examples of an agency that has lost its grip on fiscal reality.

“No perfect solution exists, some cities have got it more right than others.”

If no perfect solution exists, some cities have got it more right than others. The Greater London Authority (GLA) – because of its limited scope mostly focused on transport, public safety and economic development – has focused on doing a few things well. Its focus on transportation is targeted at an area where regional coordination really is crucial.

Clearly, transport has to be designed and implemented on a regional basis, at least for major infrastructure. New York’s Port Authority arguably went off the rails in the late 1960s when it expanded beyond transportation and got into the real estate business by building the World Trade Centre.

So the best way to start charting a middle ground between fragmentation and amalgamation might be for cities to look for ways to better regionalise transport governance. It won’t be easy, not least because of the common fighting over territory, both geographical and bureaucratic. London’s success with the GLA, compared with how amalgamation set Toronto’s transport planning back a decade or more, shows that creating a regional entity is only half the battle. The real drive is to create regional agreement and consensus .

As cities mushroom and fragmentation increases, that consensus is becoming more crucial – and harder to achieve – than ever.

This feature is adopted from The Guardian.

Cities' Past, Its Undoing Or Its Foundation For The Future? 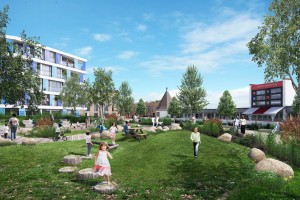 What’s The Perfect Size For A City?