The new Waterline Museum near Utrecht reveals another side to the Netherlands’ mastery of waterways and coastlines. For 100 years, the moat surrounding Fort bij Vechten in the Dutch province of Utrecht was used to deter and repel attackers. Today it draws people to a cultural space that celebrates wild feats of landscape engineering; recasts the role of water with technocratic precision; and reuses military infrastructure as a progressive nature preserve.

In other words, it’s as Dutch as you can get—the landscape-design equivalent of filling a wooden shoe with Gouda and hurling it from the top of a windmill. What is now the Waterline Museum at Fort bij Vechten was built in 1867 and takes up 42 acres. It’s just one way-station in the vast system of the Waterline, which encompasses nearly four dozen forts running 52 miles roughly north-south through the Netherlands. These forts controlled moats two miles wide that kept the country safe through much of the 19th century and World War I. (The “Old” Waterline dates back even further, to the early 17th century.) Today the defenses are a national monument, have been nominated as a UNESCO World Heritage Site, and are still the nation’s largest-ever infrastructure investment.

The Dutch have been reclaiming land from water since the Middle Ages with dikes and polders, so it’s no surprise they came up with ingenious ways to do the reverse to their enemies. Much of the Waterline system didn’t use traditional forts with deep moats. Instead, there were wide, shallow channels filled with water only one-and-a-half feet deep, creating a muddy morass too slow to cross on foot or horseback, and too shallow for boats.

Some encampments, like Fort bij Vechten, sat too far above sea level to channel in a ready-made swamp. The fort was decommissioned in the 1960s without ever having been attacked. But Penne Hangelbroek, who saw the project through the initial master plan 10 years ago to its completion this year, says it was more than a paper tiger.

During his research, he came across German World War I archives that considered the potential cost of invading the Netherlands. It was too high, because of the Waterline system. “The best systems are never attacked,” he says.

LEARN MORE  In Copenhagen, An Art Gallery That Was Once A Cistern Of Hope & Life

For 40 years, the fort was little more than an overgrown archaeological find. It was owned by the state forestry agency, which wanted to maintain its status as refuge for the endangered flora and fauna that had moved in, including four species of bats. The local provincial government wanted a more educational and publicly accessible space, and it fell to Hangelbroek andAdriaan Geuze of landscape architecture firm West 8 to balance the two ambitions.

They chose to maintain the forest that’s grown up over much of the site, but peel it back across a 386,000-square-foot cross section, restoring the fort to its state in 1880, from moat to moat across the entire island.

The restored landscape is a series of rounded and rectangular earth berms, walled in by brick and filled with 12 feet of soil and sand, all topped with sod. Hangelbroek and West 8 dredged soil from the moat to reshape the earthen mounds. These thick roofs cover 20 underground buildings, and filter rainwater that’s channeled into the surrounding moat. Bats were corralled into a handful of specially prepared underground buildings, made more hospitable for them by drilling small cubby holes in the walls and adding radiantly heated floors. The signature cloverleaf defensive shape and rich brick immediately put visitors into a landscape of sepia-toned Great Men on horseback rattling sabers at the sky, but the well-defined landforms are sharp and contemporary. These are abstract layers of terraces that blur the line between building and landscape, an easy convergence of landscape art and architecture.

There are layers and layers of history at the fort (it was a Roman military encampment centuries before the Netherlands existed). Hangelbroek, however, didn’t want a typically didactic museum experience for the landscape, with expository plaques and signage. He preferred to let the power of the place—cleaned and clarified—speak for itself, preserving some of the mystery of its 40 dormant years.

“It’s still hidden [like] a treasure,” he says. He wanted an experience that you could casually “stumble upon, then start to wonder, ‘What is this?’”

Visitors enter the site through a careful procession that shows off the landscape’s most eye-grabbing features. A bridge takes patrons across the moat on the longest route possible. A 20-foot defensive mound is cleaved in two with a pedestrian path that leads to the inner section of the fort. The museum itself is hidden underground. The actual museum is what turns this project from a landscape restoration to a clever example of adaptive reuse. Hangelbroek administered a competition for the designer of the museum with two key requirements: The museum must be embedded in the landscape, and it must feature a model of the entire Waterline system. The winner was Anne Holtrop, a rising Dutch architect who offered an understated approach.

The small museum is mostly imperceptible from outside, as it ducks into the site’s topography. Inside is a meandering series of arcs and curves, a reference to the Waterline’s rivers and waterways, and also Holtrop’s signature. It is made of pigmented concrete sculpted into smooth horizontal bands, an abstraction of the rich brick seen everywhere else.

The exhibits focus on the history of the Waterline system (there’s a video game where you control the system’s locks to keep invaders out, a virtual reality parachute jump onto the fort, and various archeological finds) but the project’s largest exhibit is outside, in the courtyard.

There, a 160-foot model of the entire Waterline system is carved out of the concrete, complete with locks that allow visitors to flood the model with 5,000 gallons of water. “I wanted to create a physical experience,” beyond computer screens or diagrams, “that shows the power of the defense system,” Holtrop says. The development of the Waterline Museum site mirrors the Netherlands’ own attitude toward water management. The Dutch began building dikes to wall off the sea in about the year 1000, but today they focus on using more porous borders to work with the land’s hydrology. It’s no accident that in the wake of Superstorm Sandy, federal officials looked to a Dutchman for guidance on how to make American coastlines more resilient.

Likewise, Fort bij Vechten started out as an impenetrable wall, and has ended up as a tourist destination.

Rome Was Not Built In A Day, Then & In The Future

The Deadliest Pandemics In Human History

The Deadliest Pandemics In Human History 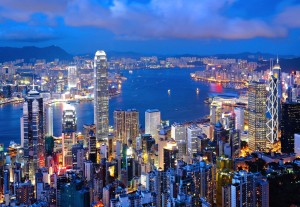 Top Flea Markets In Hong Kong For The Lunar New Year
In Hong Kong, you can dress a bride, redo a…
SHARE