Artist Olalekan Jeyifous creates fantastical, futuristic images of Lagos, Nigeria, to get people thinking about how we live today.

Olalekan Jeyifous may have trained as an architect, but these days, the Nigerian-born, Brooklyn-based artist is much more interested in sparking debate with his conceptual drawings and sculptures. Starting conversation is at the center of his Improvised Shanty-Megastructures series, a speculative, forward-facing vision of Lagos, Nigeria, one of the world’s largest cities (with an estimated population of some 21 million). His images, which he creates through a process similar to architectural renderings, juxtapose sprawling shanty-town megastructures with shiny luxury developments. He aims to highlight how urban development tends to focus on the wealthy and often displace poorer communities altogether.

Of the series, he says, “I hope it gets people thinking about these communities, less as this aggregate, poor slum and more about the individuals who live there.” He also wants viewers to learn from informal settlements’ often-unheralded design and sustainability practices. Enjoy this tour of a mind-bendingly unique sci-fi world. 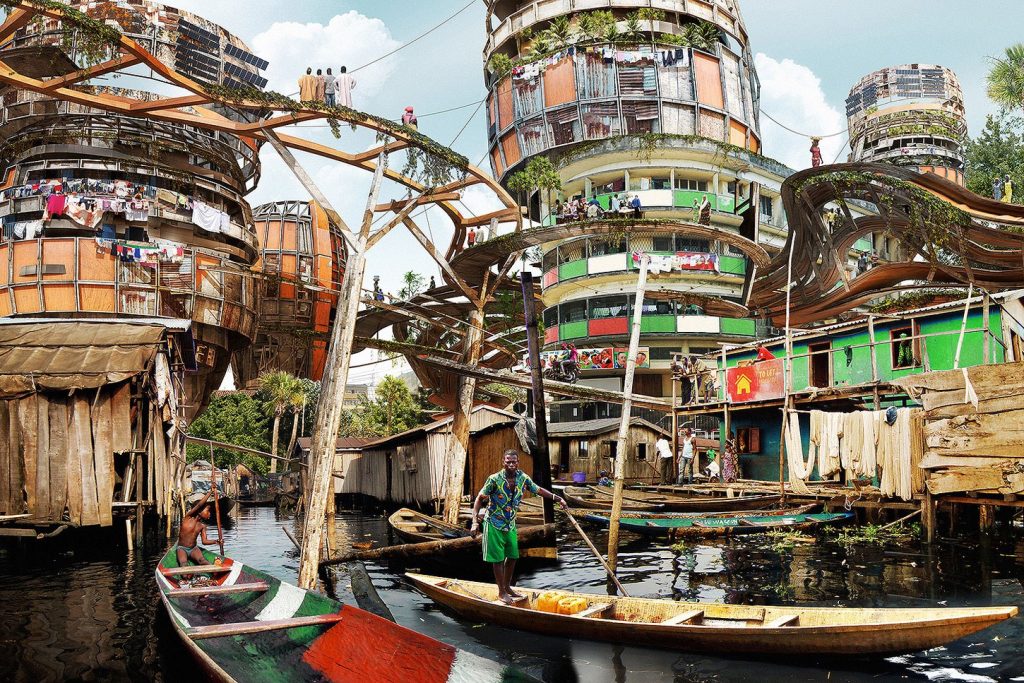 A tomorrow that’s rooted in reality

Jeyifous chose Lagos because it’s one of the fastest growing megacities in the world. His project originated in Makoko Village, a floating fishing village within the city and home to an estimated 85,000 residents, and expanded out into the city. Here, he montaged futuristic structures — vertical, imagined variations on real shanty buildings — into scenes from the village that were themselves carefully pieced together from 10 separate images. Informal settlements like Makoko Village, and the self-organization and innovation-by-necessity he sees within them, have long intrigued Jeyifous. “I’m fascinated by marginalized communities and how urban planners and developers don’t often consider them in any real way when they’re looking to grow and evolve cities,” he says. Images from the series were exhibited at the Shenzhen Biennale in 2015. 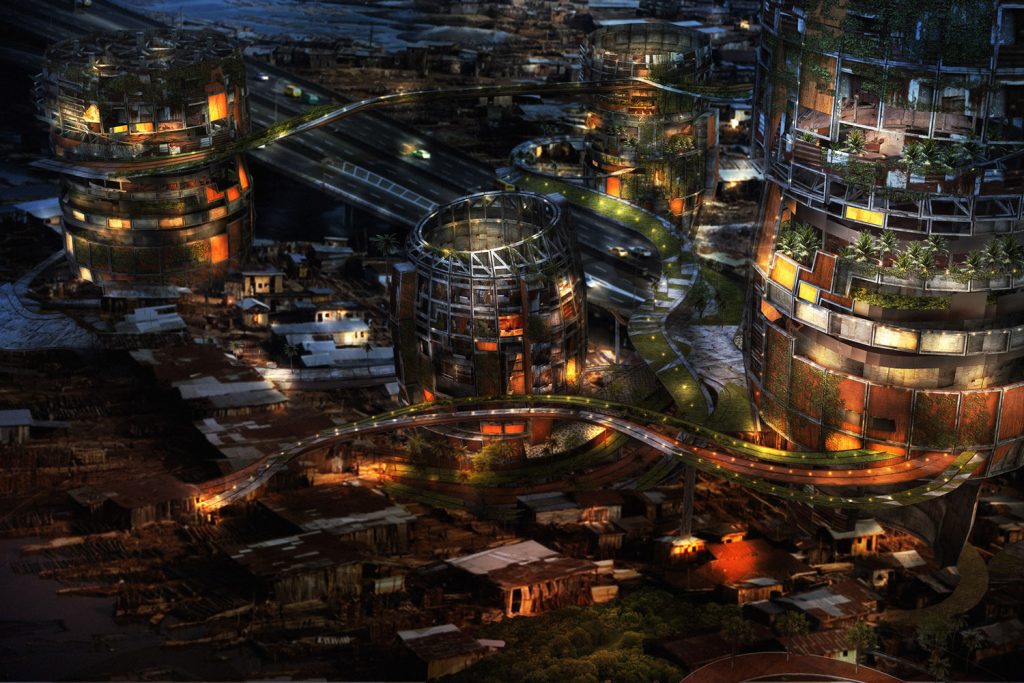 The magic of 3D modeling

To create his structures, Jeyifous uses the 3D modeling software Sketchup. He says, “in my mind, I already had an idea of what I wanted to create,” such as the cylindrical shapes and the patchwork facades made from different metals. Once the 3D models were completed, he looked for photographs from Lagos that he could use to make montages. His selection of images was influenced by his own experience of creating architectural renderings. “I’m very familiar with picking the ‘money shots,’ the views a client wants to see for their buildings,” he says. This aerial photo shows activity congregating around the Third Mainland Bridge. The image was originally a dayshot that Jeyifous transformed into a striking nighttime vision. 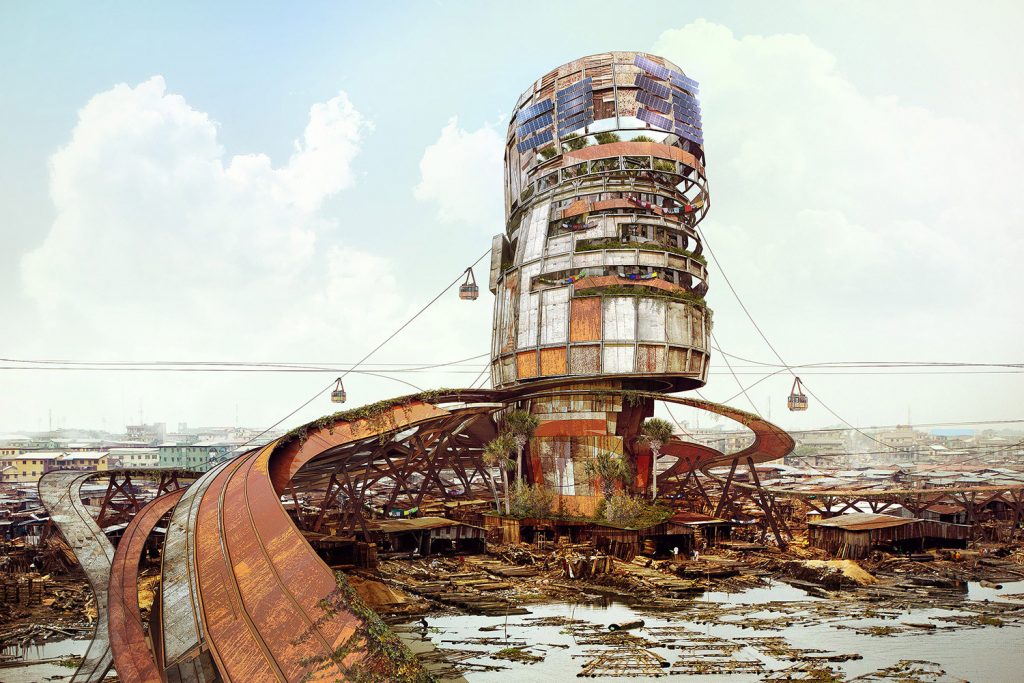 The structures themselves are what architects and engineers call space frames. “They’re less buildings and more prosthetic armatures that other buildings, walkways, catwalks and tunnels latch onto,” he says. “The idea is that the interiors are not designed; it’s just a cylindrical hull.” As the community expands, Jeyifous imagines different elements being attached onto the hull, giving the project an organic, dynamic feel. While Jeyifous’ architectural training can be seen in the frames’ intricate construction, he is careful to stress that he is not offering design solutions but science-fiction narratives. “I don’t want to elicit real-world architectural criticism,” he says. Instead, he hopes his images spark thought and conversation about low-income communities, how we can involve them in urban development, and how we can learn from them. 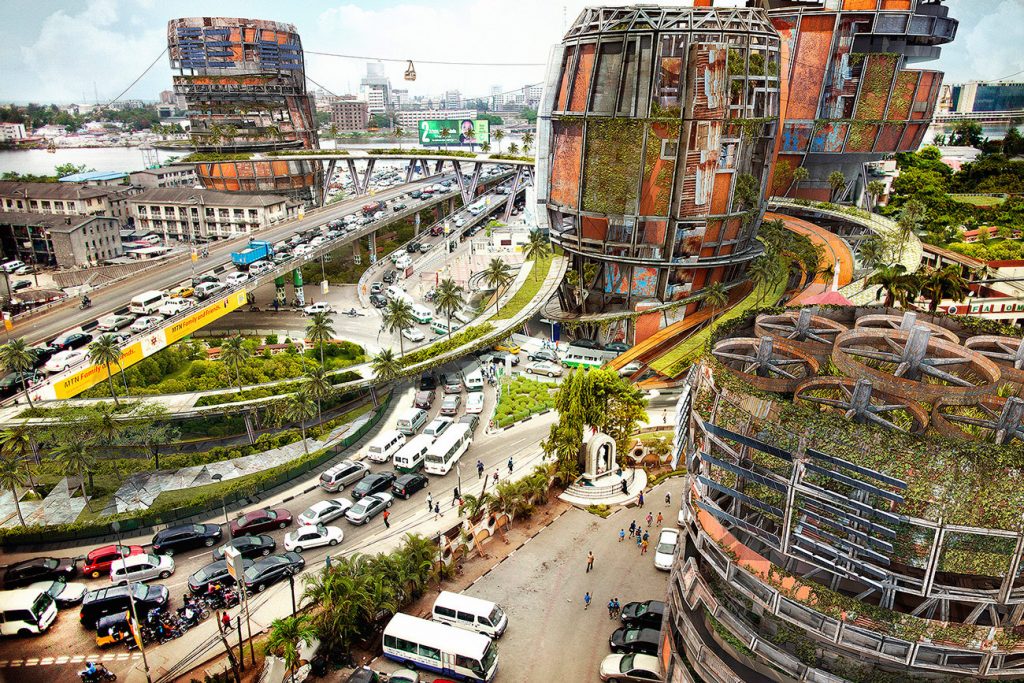 The recent destruction and displacement of marginalized communities has fueled Jeyifous’ work. For example, in 2011 came the destruction of the Cabrini-Green housing complex in Chicago, which, he points out, occupied prime real estate: “Cabrini-Green was right next to downtown, literally walking distance from it.” Much of the area has been filled by luxury high-rises. Then came the 2016 Olympic Games in Rio de Janeiro, Brazil. “City officials treated the favelas as eyesores, more, ‘This is going to be a national embarrassment, let’s bulldoze them,” and less ‘let’s do something with these communities,’ he reflects. “Their strategy for preparing for the Olympics was sweeping the favelas under the rug.” By placing his imagined communities in desirable locations and then scaling them up so they dominate the city’s skyline, Jeyifous attempts to make the communities both impossible to hide or ignore. Here, he rendered four structures close to the Falomo roundabout, a well-known Lagos landmark and a symbol of privileged real estate. 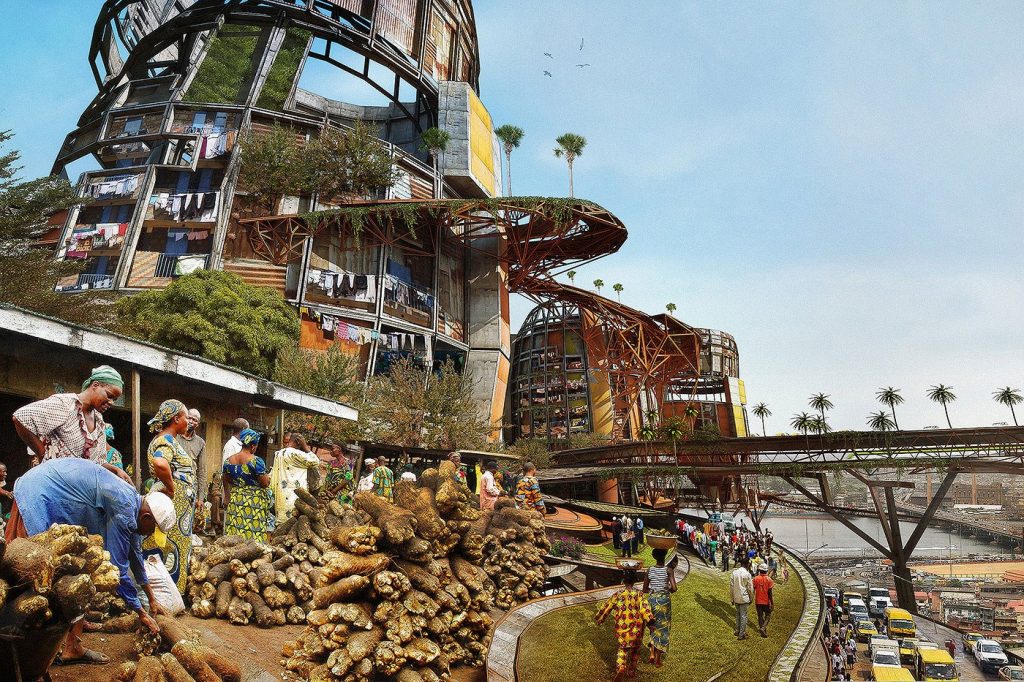 “In Lagos and a lot of other cities, there’s this dichotomy between huge, multinational businesses and a very informal market culture,” says Jeyifous. He imagines his future world as driven by the informal economy and a barter system. He’s also highlighting some of the sustainability practices employed by poorer communities. For example, residents constantly repurpose materials — they recycle plastic and rubber detritus, and use trash, sawdust and mud to create land masses and reinforce walkways and bridges. He believes these innovations, sparked by necessity, offer important lessons for a planet straining under the weight of its growing population.

LEARN MORE  Bringing Back Medieval Medicinal Gardens To The Future 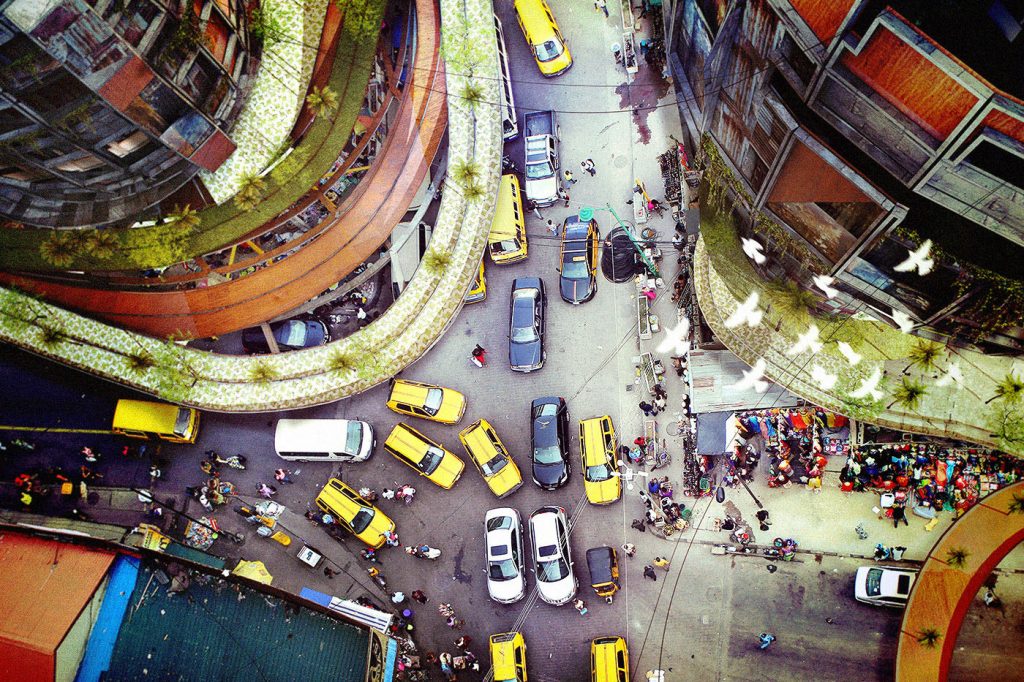 Other than Jeyifous’ futuristic space frames, this image could have been taken in many cities around the world. That’s intentional. “When we look back over time, progress seems like it occurs in such a huge leap, but the actual everyday human experience is more a gradual evolution,” he reflects. “It doesn’t really happen all at once.” His work is not about propelling viewers into a completely unrecognizable future. “A lot of things coexist, like we start flying but there are still trains, buses and vans,” he says. “We’ll still retain a transportation culture we’ve had for a very long time.” 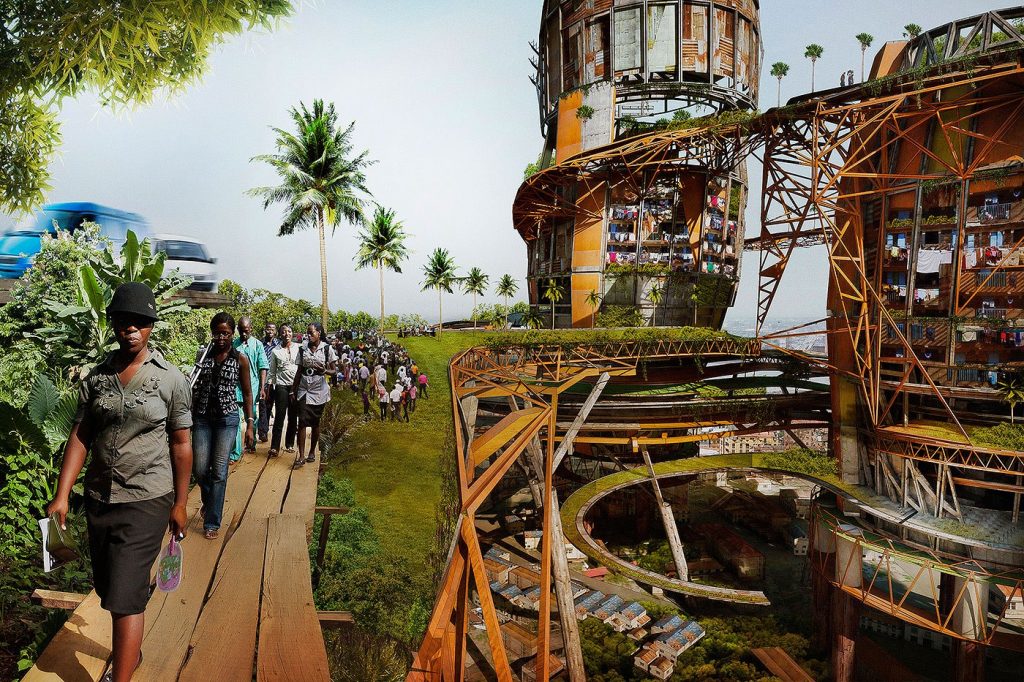 When Jeyifous began working on this series, the images he created were very much centered on the architecture. “If I had people in there, it was simply for scale,” he says. However, in later images — including this one — he began adding people to his fanciful worlds. Specifically, he is in the process of adding human narratives and vignettes, “small slice-of-life glimpses of what your typical inhabitant of this world looks like, what their day-to-day is,” he explains.

Adding human characters is just one way that Jeyifous is seeking to deepen the project. His future plans for the work include adding interior images to show what the rooms inside his structures look like, and virtual-reality and gaming experiences that allow users to run around the space independently. “I started with a conceptual approach, which was completely detached, and now I’m moving closer and closer into the project,” he says. He loves how this image is both abstract and active. “You see people walking across the bridge and vehicles, and then you see how the twisting walkways spill over it and underneath it,” he enthuses. “It really shows the blend of the existing architectural landscape and the way this new world has grown around it in a loose, organic way.”

All images from Olalekan Jeyifous.

This feature is written by Rebekah Barnett & originally appeared inTED. 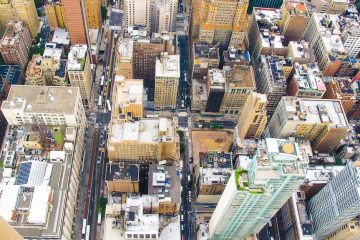 How We Can Recycle More Buildings 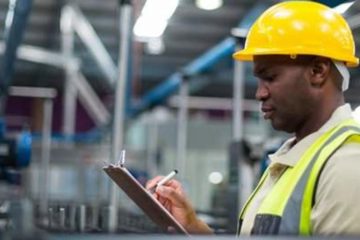 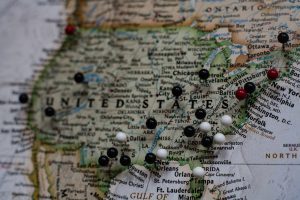 Here Are The Real Boundaries Of American Metropolises, Decided By An Algorithm
How is the U.S. actually split geographically? American regions, based…
SHARE